It’s been a few weeks. I’ve been preoccupied elsewhere. My job is ending next weekend and with US Thanksgiving passing by and the winter holidays smacking me in the face, I’ve been out of Sims 3 steam, including writing steam. Even now, I’m a bit drowsy. I was hoping to refuel with lunch, but the place I ordered from changed their menu and everything kind sucks, so let’s do it to it regardless!

Well, at least we can see who she looks like.

Fun fact(not so fun fact): Since Penny was born, I’ve had Penny Lane stuck in my head.

After her makeover, she became even cuter!  Little pigtails and an Alice outfit!

She’s going to get a ton of pic spam!

It may have already started…

I feel no shame! 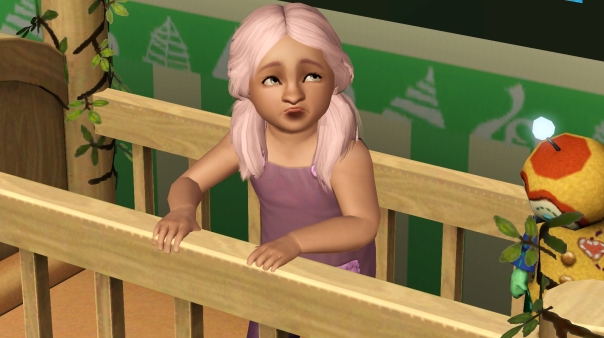 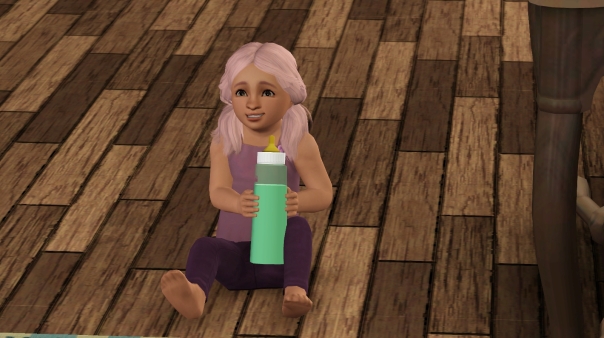 She could be horribly rotten on the inside and I would just let her burn it all down. 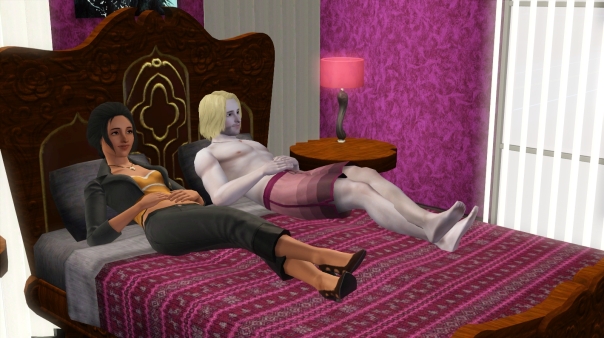 Speaking of kiddos, it’s time to get the final one baking.BTW, there are already eight sims in the house. We are full and I’m going to try to stuff more in like an extra paper plate in a full garbage bag. 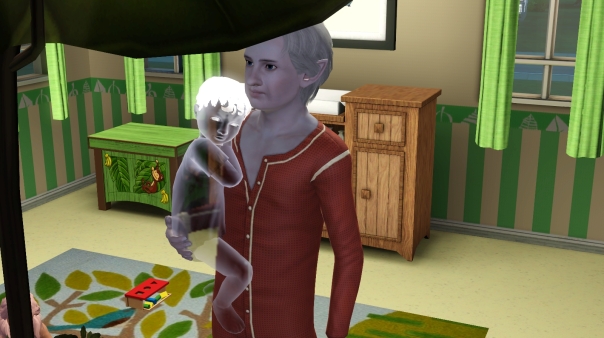 Not to forget about the other tot in the house, it is time for Axton to grow into a boy! 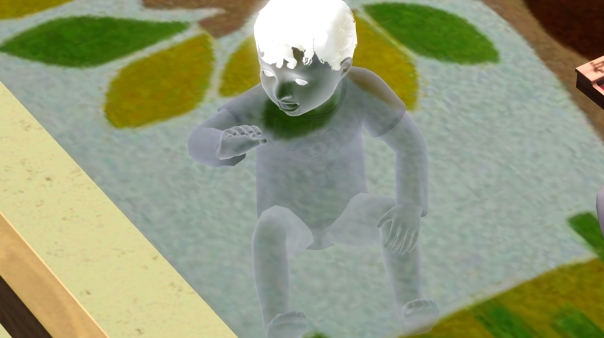 If anyone doesn’t remember, Axton is Owen’s much younger brother and our attempt at the monster mash mini-challenge. Side note, on my own, I’ve been working on the full monster mash challenge in TS4. You know what is surprisingly hard? Killing a sim with pufferfish nigiri. Make a poor quality plate of it and eat it and they will probably die. NOPE My sim has tried twice! 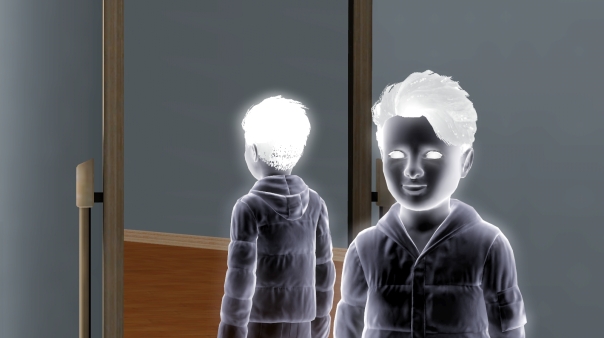 He’s cute. I’m having an insane amount of trouble ascribing features to one parent or the other. However, he does seem to heavily favor his dad. He doesn’t even have the pointed ears like all three of his brothers. 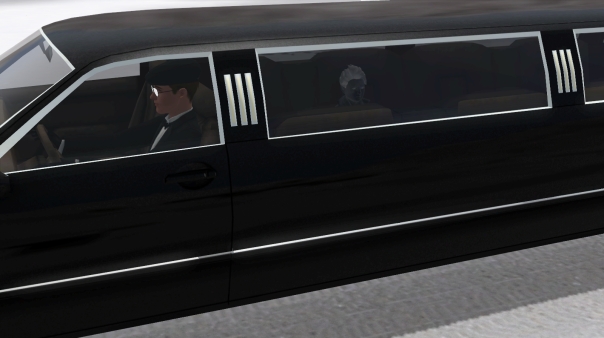 Since he’s not technically included in the LTW requirement, we’re going to ship him off to Smuggleworth Prep.

Bye Axton! Come back when I can change you into something! 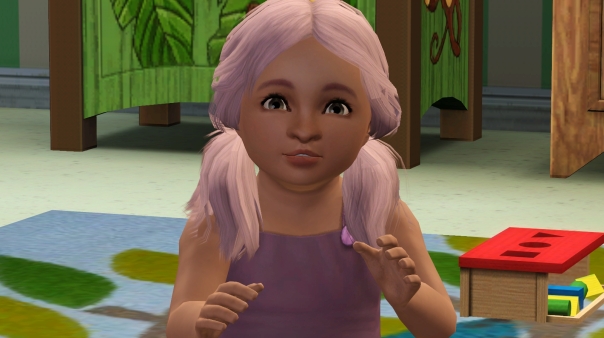 More from the kids! Unless it has to do with the kids or making more kid, you haven’t had a single image of an adult. Whoops.

But looks at Penny and her face! She’s so….GAH!

From the adults, however, is the news that Owen can finally retire! That puts us at seven out of ten careers topped.

Also, I wish there was a delivery service for gum. But that doesn’t have anything to do with anything.

Woop, there it is.

Morning sickness. The last bout that we will see in the OWBC. 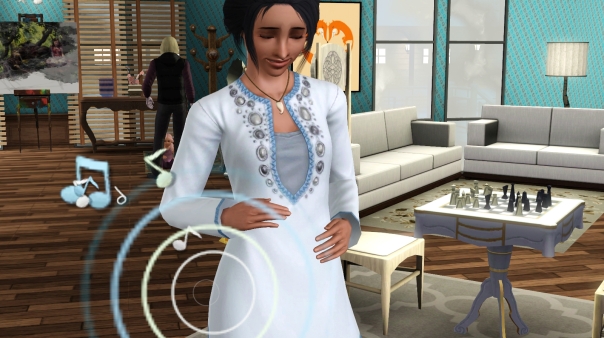 Also, the oldest of the generation 3 kids is teenifying!

Awww. He’s the crazy cat lady from the Simpsons! Or me in 20 years.

Oh no. That nose is…not great. It’s only his nose! If it wasn’t for it, he would be fetching. But dang that looks like it hurts.

It’s not so bad-looking with hair, but still. If I could get him some plastic surgery to fix it, I would but alien’s, I had forgotten, can’t go under the knife.

Downstairs, we have more Penny. Learning her skills like a big girl!

And her papa is so proud!

Just showing I got Orwell’s picture for the wall. 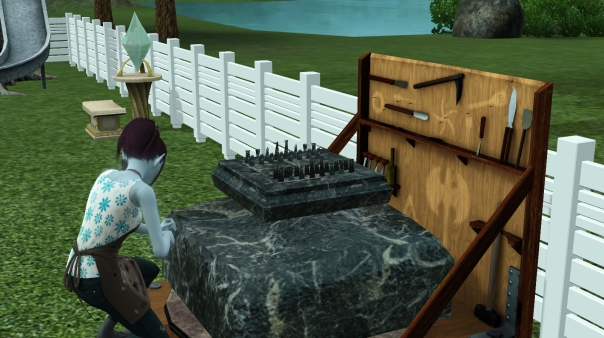 Meanwhile, Cammie is plugging away at sculpting. I believe she is a few away from topping.

Just so you know Kira is still alive and gestating. 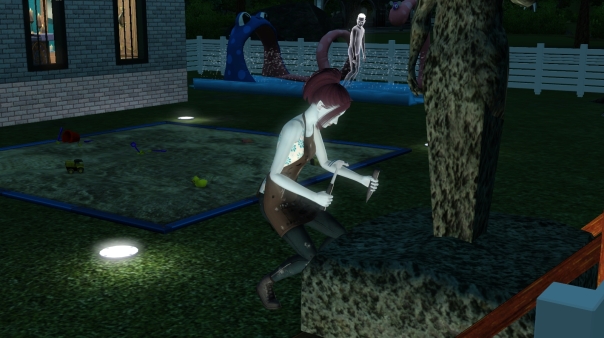 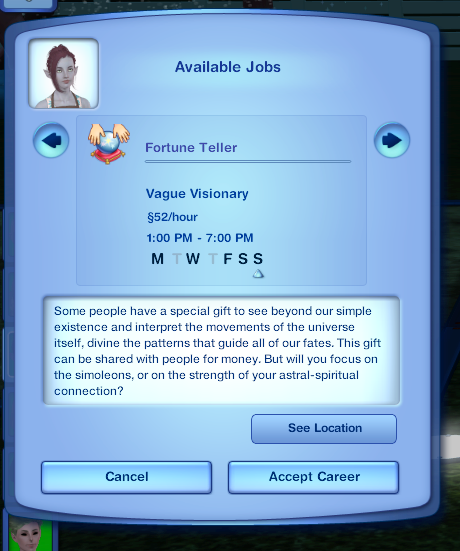 And we replace it with fortune-teller. Like I said, with Kira being pregnant and on a ridiculous amount of leave, I want a back up.

Plus, Cammie’s degree gives her three levels off the bat so… 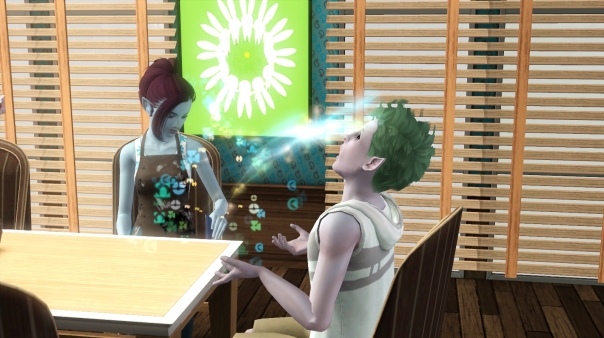 Supernatural’s table. It’s too cool for you.

Meanwhile, the humans are adorable! More tot pics! All the time! 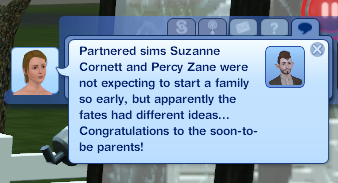 Percy is having a kid! Yay!

I’ve gotten into a habit of changing Cammie’s outfit to suit her current life pursuit and this is no exception. I thought this store dress, which is from one of the boho collections, looked very fortune-teller. So I ran with it.

But the mundane will always be outshone! It’s time for the final baby of the challenge!

Are you excited? I am! 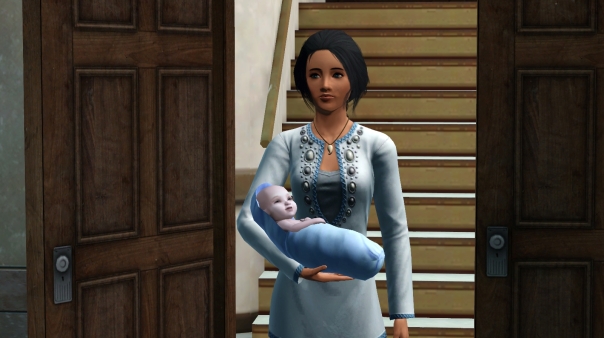 We welcome a little blue boy named Nevin. For those who don’t remember, the final letter in the name scheme is N for the .net in boolprop.net.

Here are Nevin’s stats from the next day when I remembered it to be a thing I needed to do.

This is Nathaniel. He’s the younger of the twins, who are both blue! Hopefully one of them has the same pink hair as Penny.

The house now has ten sims in the house. Two elders, three young adults, one teen, one child(at boarding school, but…), one toddler, two infants. Whew. That’s a lot! We almost have one of each. 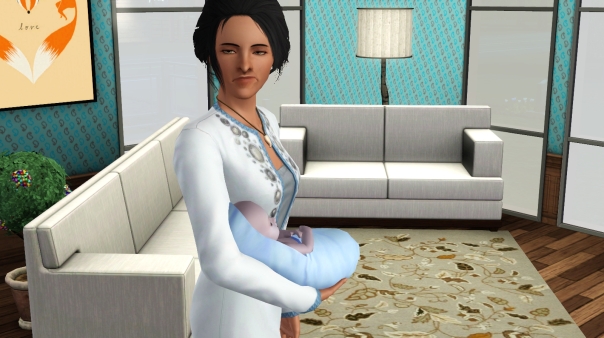 Every Zane woman has given that face at the end of their third birth.

That looks says the baby factory is closed. 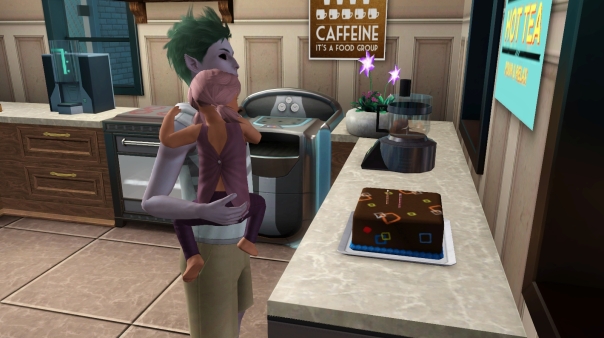 With the twins, I decided to age up Penny a day early. All her skills are done and she’s ready to go! 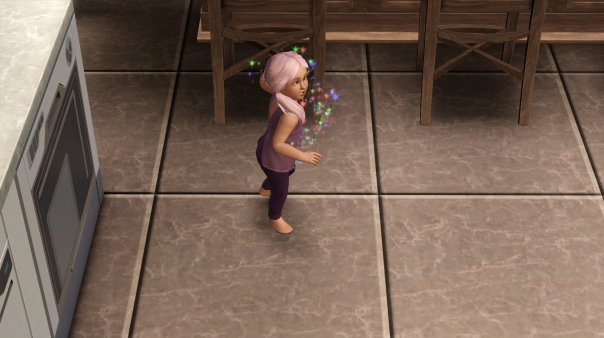 She is a mixed bag, trait wise. Well, not really. She is a bit like me. Habitually clumsy and shy, but also lazy as hell.

I built her a new room over the patio. With the house full and the boys outnumbering the girls, why not.

She looks a lot like Rook. Except the eye shape. That may be Kira’s. She’s cute, though! 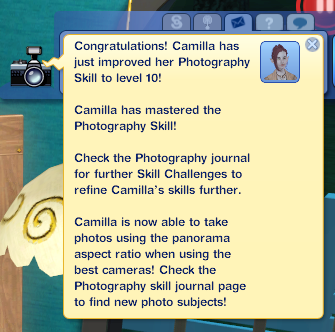 On the flip side, I had Cammie max photography. Mostly because Owen is getting old and I’m too tired anymore to do the painting route. So, if Owen dies, Cammie takes up the mantel.

I also built a greehouse…just cause.

I’m getting really sleepy guys. I’m trying to get through the photo backlog I have. 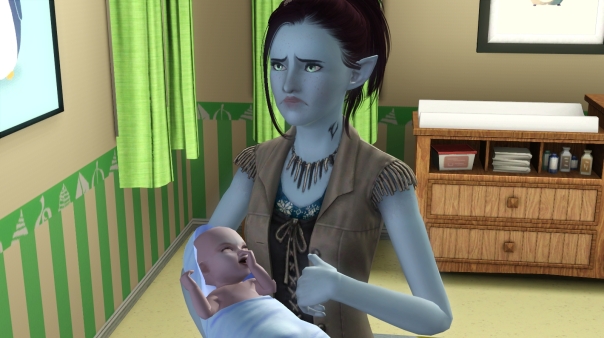 Cammie is not amused by the twins. To be fair, the N twins were very very fussy!

Because they were fussy, I took no photos of them. So, here they are turning into tots!

WHAT THE EVERLOVING HELL ROOK!?

Nathaniel!! This is Nathaniel and he is O.O cute! He got the blue skin, pink hair, and tan eyes! He may have already won the heir poll in my opinion. Little buddy! 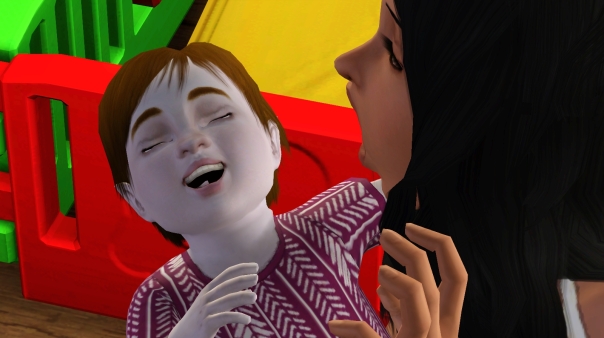 To be fair, Nevin is just as cute! He got a random shade of brown hair and blue eyes…that I recognize but can’t place right now. I think Balin had those way back when. 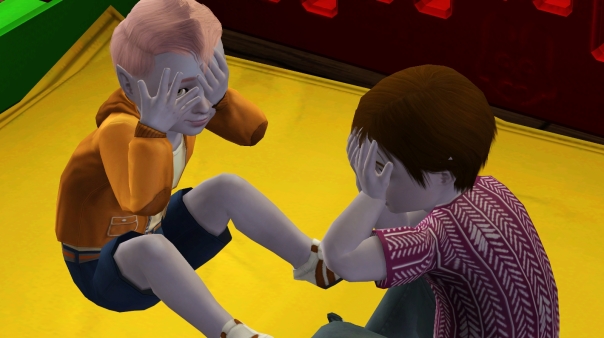 With my level of fatigue as of late, I let the N twins skill themselves. Plopping them in the playpen does have some cute results though!

It has to be a main family thing when it comes to boys. Of the genetic grandchildren and not adopted, girls are very prolific. In the main house, not so much.

One more for Rook!

One thing I didn’t mention is that Orwell rolled the LTW to be a chess master. Eh…why not. So he invited over his cousin or uncle, one of Ollie’s kids, and defeated him. Spoiler, he kicks so much ass at chess. He hasn’t lost a game yet.

Cammie got a promotion as a fortune-teller. I love the interaction for private readings. Just smacking their hand over the other sims face.

Oh crap! I completely forgot that Orwell was crazy! He hardly shows it. 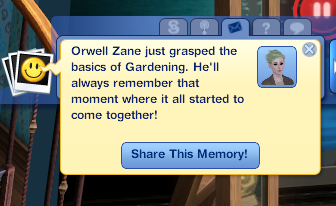 Then I did something that, while not technically cheating, feels so dirty and wrong. So I had Orwell gain a point of gardening and then signed him up as gardener. Then I sold all of Cammie’s crops through his inventory. 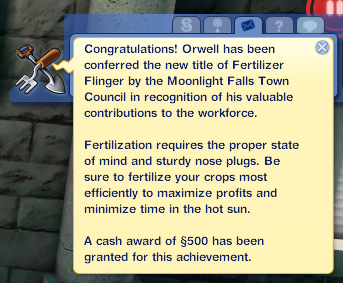 It got him to level five. I’m going to keep it up as a back-up back-up. Cammie keeps gardening anyway so…not cheating right?

We’ve had that sandbox forever and Kira is the first to do it.

Hey! Look! It’s Nevin! Nothing bad could happen with something that cute staring at you right?

Owen! No! He just hit the end of the life bar! Not okay 😦

Grim is a dick. 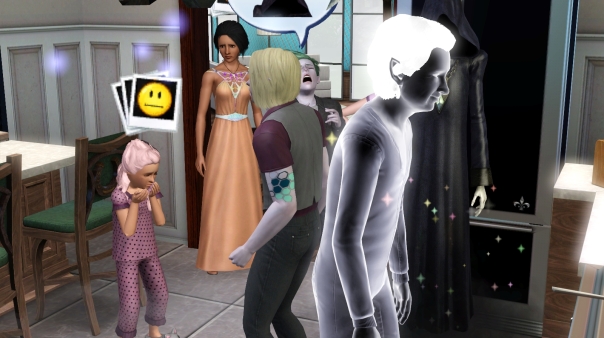 Poor Penny may be the most effected. Orwell looks just as upset, but…

So his gravestone goes next to his father’s. One last thing before I say adieu. Owen was the first child of generation 1 to die. He was the youngest, but first gone. It makes it extra sad.

So, I must leave you with that sadness. I’m tired and bit frustrated. I’ll try to get another one out sooner that I did last time, but no guarantees.